On my way home from the London gig and I wanted to drop you a line to let you know how it went.

The Underground is a smallish basement club in Camden and is an ideal place to get close to a band and to nullify some of the sound problems that bigger hall style venues can generate.

The band came on just before 9pm with a heavyweight opening of Lights Out. As with most gigs, the sound got better as the gig progressed, although it was pretty good from the start. I agree with Rob that Schenker's new guitar perhaps lacks a bit of the top end bite of the old Gibson, but we are really splitting hairs here and he still sounded clear, oh-so melodic and, quite simply, Michael Schenker. I count myself as very lucky to have seen 2 MSG gigs in 8 months and it is so great to see Mr. Schenker playing better than he ever has and touring like an 18 year old.

I am a big fan of Leif Sundin and I thought he sounded great live. He obviously struggled with knowing the words to some of the songs but he has a fantastic voice, really clear and distinctive and he carries a melody very strongly. His voice worked well on the UFO songs and his performance on Attack of The Mad Axeman was superb - the best version of that song I have heard.

The new singer, Jari sang on a couple of songs and has a truly mighty voice and range - definitely one to look forward to next year.

The rest of the band were on fine form. Pete Holmes really shone for me and he picked off the early Schenker songs (and Simon Phillips licks) perfectly. Some of his drummimg really put me in mind of Jon Bonham.

Outstanding songs for me were Armed & Ready, On & On. Attack of the Mad Axeman and Rock Bottom.

I have brought a few non-MSG fans along to the last couple of gigs and all of them have gone away smiling having really enjoyed the evening. Great songs and great sound with one of the finest guitarists in the world on superlative form. What more could you ask?

All the best and keep up your fantastic site. Never mind the SITN'ers, there were lots of RBA's there!

MSG hit London last night for the second time in less than a year, in the Underground a basement club packed with 350 to 400 people. The intro music hit at 20H50 and the band came out on stage, all apart from Leif dressed in black, wearing shades and in the Rev's case, a crushed velvet hat that he must have stolen from his grandmother. They stormed into a thunderous Lights Out and it was clear that the whole band was spot on from the word go. Michael had none of the tuning problems with his Dean that previous reviews have mentioned and it was only Wayne who seemed to have minor technical challenges. Then into Are You Ready, with additional lead fills by Michael. By Mother Mary, the shades were off, as was the Rev's hat and his dreads were spinning furiously.

Leif was enjoying himself and doing a brilliant job, although he seemed to struggle a little with Let It Roll. Jari from Finland was then introduced as one of the singers on the forthcoming Tales of Rock and Roll album and did a great job singing Assault Attack, Arachnophobiac (featuring a solo from Wayne) and Fatal Strike. Whilst Jari needs experience, he has an incredibly strong voice, not unlike Bruce Dickinson, hitting all the high notes with more power and precision than Chris Logan did at the last London gig.

Arena was up next, with Michael turning the clock back 20 years. This included solos from the Rev and Pete Holmes on the drums, that Michael himself applauded from the side of the stage, before Michael retook the stage for some improvised lead before returning to the second half of Arena. Leif rejoined for Rock n Roll Believer, with Michael getting a superb tone out of his new Dean that just sliced through the wall of sound. THTH came next, followed by On and On, which allowed Wayne to shine on the keys and featuring a blistering outro solo from Michael.

Only You Can featured Michael playing along with Wayne during the keyboard intro to the solo (which Michael absolutely nailed) and in another departure from tradition, Michael played an ending solo to the song. Mad Axeman was another tour de force with an extended blistering solo from Michael. Doctor Doctor and Armed and Ready were the first encores, followed by the inevitable Rawk Buddum. I've seen Pete Way just lie flat out on the stage during the extended solo, but the Rev took a more leisurely approach, sitting on a stool while flurries of notes bounced around him from Michael's guitar.

After the show, Michael was straight out for the signing, accompanied by his sister Barbara. Michael seemed extremely happy and relaxed, signing anything put in front of him (including female flesh). He signed my copy of The Odd Trio, discussing with me and Barbara how the three photos were all shot on the same day and how he was inspired to do the photoshoot by his father, who used to put on false moustaches etc to amuse his children when they were little.

Michael and Leif were non-committal about future recordings, other than that Leif hopes to be on the Tales of Rock and Roll album in the New Year. In some respects, this is a shame, since Leif interacted well with Michael and the rest of the band. I have certainly never seen any other singer put his arm around Michael while Michael has been soloing.

Overall, everyone was on top form, with not a single bum note at all. When everything goes well, Michael thrives and performs at that inspirational level that sets him apart. I came away with the strong impression that Chris Logan's departure has brought the rest of the band closer together. Certainly, the instrumentalists, particularly the Rev, seemed to have stepped up the entertainment level whilst still hitting every note and this brings out the very best in Michael.

Made it to Camden last night.

First surprise (not paying attention I guess) they were playing the Underworld, not the venue they played earlier in the year. It's fair to say that this is a little on the small side...my front room can probably hold that many people!

The set list was pretty much as per earlier in the tour, just rearranged a bit:

And maybe one or two more that I forget...

Main points of note, or hilarity

A older bald with long hair type spent the time prior to MSG coming on holding up cards talking about God, etc and exhorting us to come see him at speakers corner. He then went into a trance during the set, only causing perplexity from Michael when he held up a tambourine and started waving it in Lief's face etc. I guess you had to be there

2. Did you spill my pint? Or - if you're going to headbang, please try and stay in one spot

A few of us were down the front in front of Michael, as usual. However, when Mother Mary started, one vertically challenged, horizontally maximised, follically disadvantaged (short, chubby, bald) bloke went absolutely mental, forcing us almost on to the stage. Michael's mike (!) went over, beer just missed his pedal board, etc etc. Chaps next to me got extremely p***ed off - as you might expect - and I spent the next two songs trying to act as a wall preventing our over-excited friend causing more bother

Look very very nice, and sounded good, apart from a tendency for one string to dominate - but that might have been because of where I was standing

Michael did a long signing session afterwards, and was friendly and polite - as seems to be the norm at the moment

I thought Lief did a great job under the circumstances. I loved WITS and would have been very happy to hear some of these live, but to be honest I am sure they didn't want to make too many changes at once!

Jari - has a wide range, can hit the Bonnet notes - even if he has to clutch his stomatch to stop his lungs exploding as he does so...but frankly I prefered Lief. he also looks completely bemused on stage, like he took a wrong turn at the bar!

Played one wrong note - I hope this doesn't cause him any traumas! Only joking - he was on top form and played really really well

Mr Tour Organiser - please realise that even in today's tough times, Michalel/MSG can pull in 400-500+ people in the UK and book appropriately sized venues. Thank you very much.

Awesome setlist and playing by Michael - seemed to be enjoying himself -finally exorcised the ghost of UFO at Manchester. 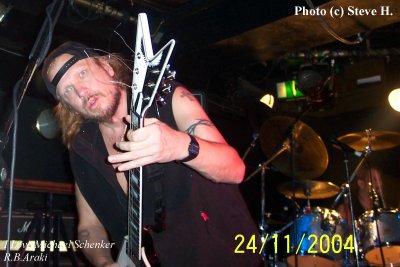 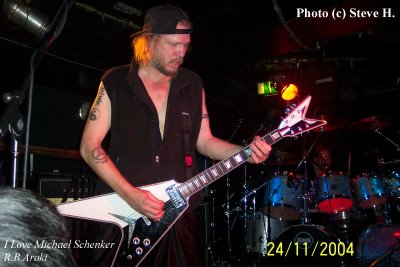 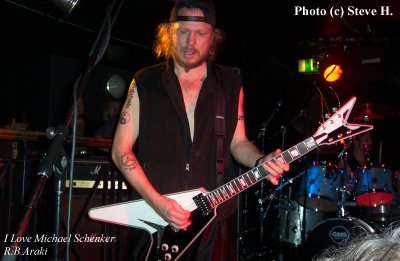 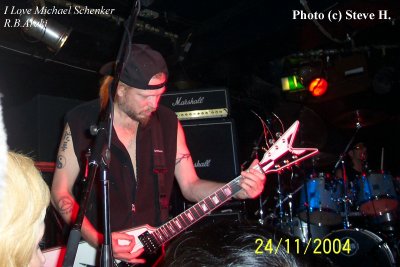 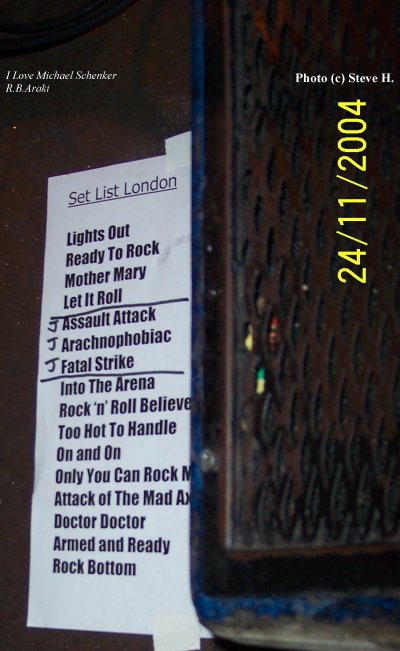 You've already received a few reviews about this and I don't wish to be repetitive. However, I just wanted to reiterate what a truly great gig this was - even better than earlier in the year, which is saying something. Hopefully the press reviews will bear this out this time. The venue was small but, on the plus side, very intimate, which resulted in a great atmosphere, with a definite feeling of anticipation and excitement in the air. On reflection, I preferred it to the Electric Ballroom, although the band themselves might prefer that venue's bigger stage area. The sound was superb, and I liked the look of the Dean V, which was much better looking and proportioned in reality than in the photos I've seen. To my ear it perhaps even had a better tone than the Gibson V, although there's probably not a lot in it. Whatever, Michael seemed very comfortable with it. Lief was great, and in my opinion has the edge on Chris. Yari was clearly nervous at the start of his bit but warmed to the task as the numbers rolled by. I'm certainly looking forward to the new CD. As for the 'trouble' during Mother Mary - well put John!! Overall a superb night. Thank you to Michael and the rest of the band. Looking forward to the next time!

Just to let you know I went to the MSG show last night - it was excellent. Michael seemed relaxed and happy, playing was superb. It looked pretty full, the capacity is listed as 500. Michael came out immediately after the show and did a signing session. 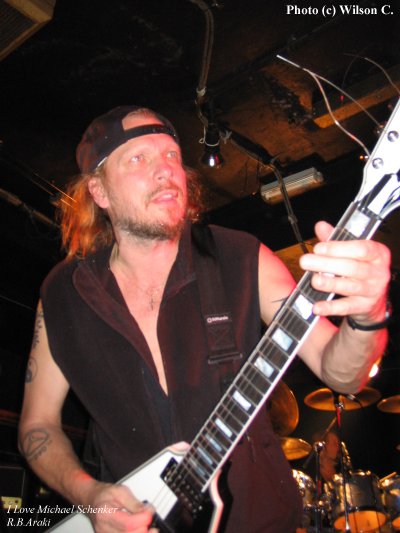 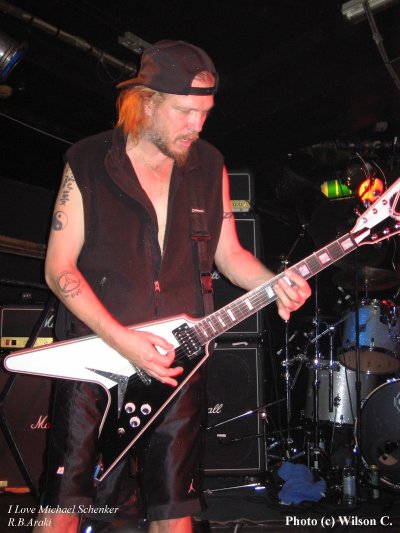