Really, ditto to all Rich says. Both bands (Uli is not a "band" exactly...) soundchecked for a long time. The opening act was EXP doing 3 Hendrix covers. Not too bad. Uli was ethereal, respendant in his red velvet jacket and turqoise. He played the blue sky guitar and his tone was just exquisite. I was three people back from the front of the stage (I let the shorter people stand in front..) and I know what Rich means by the phasing problem. It was fine for me though, also, to be so close to the man. One of the coolest things was the movies being projected on the sheet behind Uli, on which you could see him in other venues playing the same songs, in time, using the same fingerings, kind of like getting to see him twice at once....coool!!!.. My camera had dead batteries (duh....) but a girl in front of me took some great pictures and I hope she will email some to me so I can share them with the list. After his set he came to the back to sign autographs and I shook his hand (the perfect handshake, by the way, not too strong, not too light, but very connecting...) and told him "Thank you, thank you SO much...". He smiled his gracious smile and said "You're elcome"....what a thrill. Just being in his presence was VERY uplifting. He just exudes peace and tranquility and love. I also got my picture taken with him and told him I was on this list. He asked my name, but, of course, I told him Mike Magnuson instead of Magvike, so it didn't register, I'm sure. It was a thrill, nonetheless. I'm not a star-struck kind of person, but meeting Uli was totally special. Like a dream come true. I'll remember it always.

Michael just flat kicked ass. Both of them are such unique guitarists. We were treated to plenty of UFO stuff. It was a rocking time, you betcha... makes me want to start playing my Marshall again, for sure....the last time I saw Michael (about three years ago) he seemed kind of disinterested, but last night he was on fire. His band was great, too. And yes, Rev was still shaking his dreads all over the stage.

All in all, it was a great night, a late night and I even went to work today anyway, even though I didn't get home till after 1:00. Of course, I couldn't go right to bed, so I went into my studio and played guitar for a solid half hour, imitating Michael (cuz, really, no way I can imitate Uli.....). I finally went to sleep with the memories of a great musical night put on by a couple of Hanover boys ringing in my head....Uli, let's not make it 19 more years before you come back!!!!! 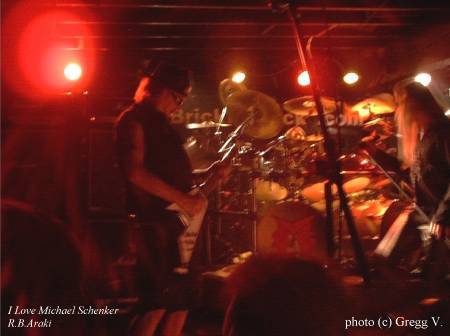 I got to the venue at about 6 pm. Michael was onstage doing a soundcheck playing "Rock Bottom" with Warren DiMartini from the band Ratt, it sounded good and was a nice preview of the encore later on. Michael took off right after the soundcheck so I would have to wait until after the show for autographs. The show got a late start. The doors were supposed to open at 8 but Uli didn't show up for his soundcheck until around 7:30 there were several technical problems with the house sound system and Uli's screen setup. So Uli just casually played his guitar while people were lining up around the building outside. Despite the problems Uli seemed to take it in stride and was very friendly to the few of us that were lucky enough to hang out inside. Finally, at about 8:30 everything was ready to go and the doors were opened. Local band EXP a three piece Hendrix tribute band got to open the show and sounded good for not having a soundcheck or being miked. Uli got started at around 9:15 and did a great set with the same songs as the other shows. His tone was awesome and he was very loud but everyone loved it. The set went smoothly without any major problems unlike the first show in L.A. It was great to see this legendary musician up close and personal after all these years. At around 11:15 MSG came onstage and opened with "Assault Attack". The band were on fire from note one just like when they were here in June. For the next 2 hours they played all the same songs they have been performing of late. I did not keep track of the exact setlist though. The mix was great and Michael sounded as good as ever. He was in agood mood, bowing between songs, smiling alot and waving to the crowd. The encore songs were "Armed and Ready" "Doctor,Doctor" and a very energetic version of "Rock Bottom" with Warren playing his old snake skin Charvel strat. Afterwards, I went to the back of the club to get some stuff signed. When I handed him my "Legends of Rock" cd sleeve he said that he had never seen it before which was surprising to me. You'd think he would have autographed hundreds by now. He flipped through the pages and pointed at the photo of Jack Bruce and said "he was there?" then Don Airey "him too?" Barry Sparks "him also?". It was nice to finally get his autograph on my copy of "Walk on Water" now complete with the other UFO band members from the reunion tour in 1995. 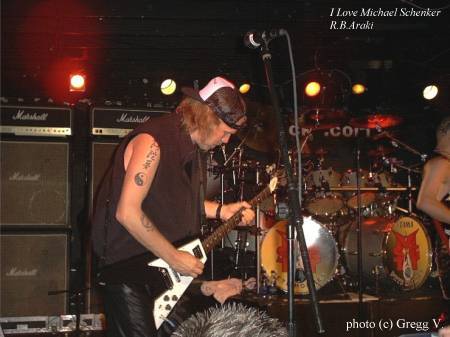 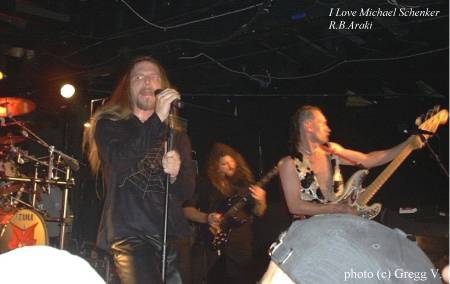 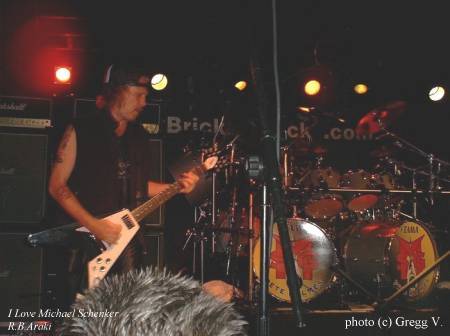 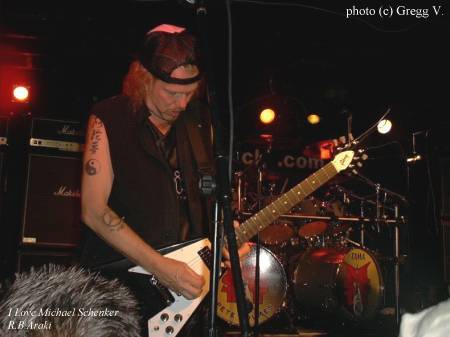 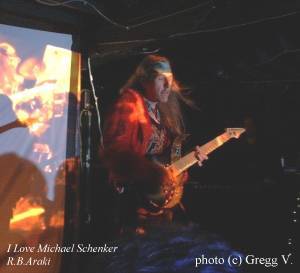 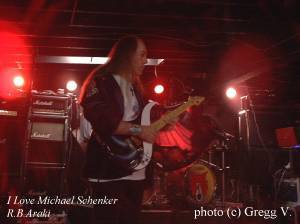 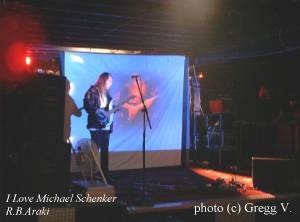 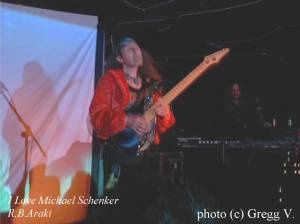 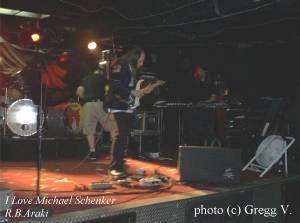