Uli walked onstage to a fired-up crowd at the Ventura Theatre, happy to see him again after a 19-year wait.I'd estimate the crowd at about 75% of capacity.I was not to be denied after all those years,so I staked my claim at front row center,no more than 6 ft. from the Sky guitar and it's master. This turned out to be both good and bad. Very good view,very bad sound.Uli had a complex rig that included the following: 4 Marshall 4x12 cabs, with his old faithful 100 watt Super Lead head. My view of the other head was obstructed by the video projection screen.Off to the side were a Fender Twin,a Vox head and two tape Echo-plex units. On the floor were a red Fuzzface,an old Roland Jet-phase, a Cry-Baby Q wah, a volume pedal, a box with 3 switches to control the amps, and a switch for the echo units. This rig was loud and clean with very little saturation. It's sustain was the product of sheer volume, rather than tube overdrive. A very unforgiving setup with very little distortion to mask poor technique. Fortunately,Uli doesn't have this problem. The problem with my spot was that with no stage volume other than Uli's amp, and no monitors or mains pointed my way, I was hearing the recorded accompaniment after it had bounced off the back and sides of the theater, causing an out-of-phase situation. No way I was moving, though. Up close,the Sky guitar is truly an impressive instrument. The action looked low but not super low, and the strings looked very light (gauge). Uli,clad in his red velvet coat and blue-feathered hat, is not a large man. There's a certain frailty to him, yet strength and warmth in his eyes. Anyway...... Here's the set list-

Sky Overture
Winter(from Vivaldi's The Four Seasons)
Rodeo From Hell
Springtime Euphoria(this one had my jaw on the floor!)
I'm A River(jaw still on the floor )
The Sails Of Charon (short orchestral interlude in the middle,and Liz singing and on the video)
Hiroshima
Virgin Killer leading into Fly To The Rainbow
All Along The Watchtower

In summary, it was worth the wait.What's special about Uli to me is this-he uses world-class technique in a way that is more human,more melodic and less mechanical and contrived than anyone I've ever heard.

His vibrato was beautiful(slower than I had expected), his pick attack and left hand touch rather delicate. And although Uli isn't "rock" anymore, I think rock musicians could learn from him. Things like playing for the song (not overplaying) and effective use of dynamics and string timbre come to mind. I would never tire of seeing him play.

Words can hardly express how much better Mike's rig sounds compared to Uli's. Same as last tour with Black Gibson V into wah into JCM 800s. Boss tuner, chorus and delay running through effects loop. The band was tight, Chris sounded strong and Rev may still be twirling his dreadlocks. Mike looked healthier than last time and in great spirits. He was clearly having fun and enjoying the adulation of his audience. He played well with one rather comical exception-he started the solo to Only You Can Rock Me, played the first few notes and then had a TOTAL brain fart and lost it. He stopped playing and held out his arms and laughed at himself. He then soldiered on and played perfectly from then on. After the show I was able to speak to both Uli and Mike at the meet and greet. Both were cordial and friendly. As I left the theater, I found myself wishing I could follow this Uber-guitar-gods tour across country like a Dead-head or Parrot-head would.Uli peace and Schenker love! 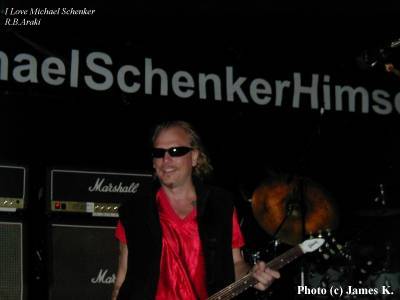 Here are some pictures from the Ventura Show. Another AWESOME performance by Michael. Uli was Awesomlly technical to, but I like the raw energy rock and roll fun of Michael much more. His solos are so heart fealt and full of raw emotion. They always say it takes a simple melody to get everyones attention and his are very unique. Anyway, I like your site and keep it straight for Michael. Lets get Michael back to town soon. I have seen him many many times since I was 15 (now 41 almost 42) and his shows are always great. I always tell my friends it is great to get older because I can see my heros up close at small venues. I do not know how MSG does it. 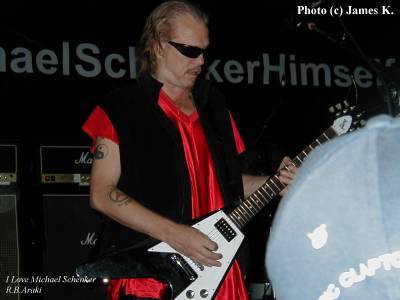 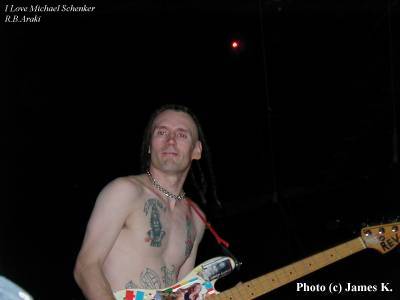 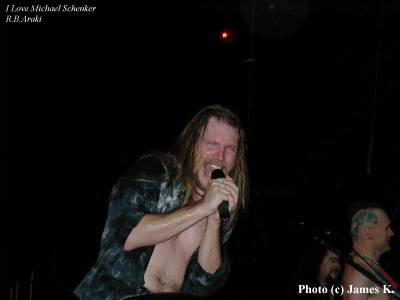 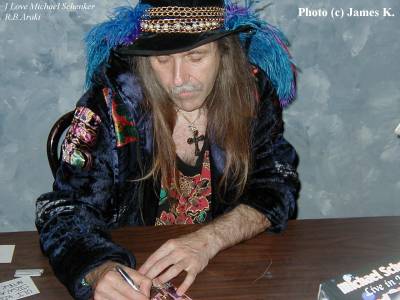