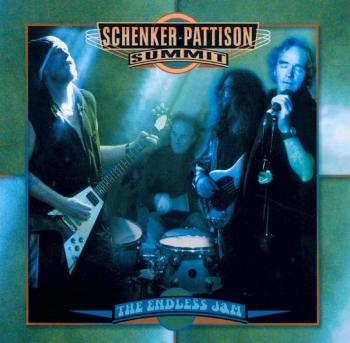 Released in April 2004
In Europe on Mascot Records (M 7093) and in the USA on Shrapnel Records
I usualy don't feel like buying cover albums. They are covered because the original songs are so great. Personally, I have seldom come across the cover songs which are greater than the originals. On a song level, there are some which I feel are greater than the originals such as All By Myself covered by Celine Dion and Black Magic Woman by Santana. But, cover albums projects always disappoint me. For instance, if some guitar players try to cover KISS, I don't think they could play the leads which fit in better although I am pretty sure most of the professional guitarists are technically better than Ace. This is partly because I always feel some kind of sense of discomfort when I listen to cover songs since I have considerable feeling for originals.

About this Endless Jam album, I feel the same vocal-wise, especially on those songs which I used to hear many times in the past. UFO version of Track 11 itself was a cover. But, it is the original to me and the impression of Phil's vocal is so strongly burnt into my brain that I can't help but feel uncomfortable with Davey Pattison's vocal. Even on the tunes that I am not so familiar with, I feel perplexed a little by his singing probably because Davey's voice and rendering are simply not my type. It's still too early to make a decisive comment, but it seems at present to me that his summit is much lower than Michael's. Of course, he is not bad at all. Maybe he is Varney's choice, so he can't be bad. It's just a matter of personal preference, and actually his singing on I Got The Fire has been circling in my head right now. Maybe it will grow on me.

Now getting down to brass tacks, i.e., Michael's guitar playing! It sounds like most of the backing and rhythm guitars were played by another guitarist (Kevin Curry?) including some cool single-coil tones. Michael plays solos and fill-ins on those backings. I know some of his fans wanted longer solo of Michael on recent MSG albums except instrumental albums. This album should completely satisfy such fans as he plays the lead almost 'endlesly' as the album title shows. His tone on this CD is similar to that on Arachnophobiac, with less distortion depending on the songs. To me, it's not the best tone over his entire career; however, it is definitely the Schenker tone, and it fits well in these '70s materials.

Unlike the case of vocals, how strong I feel about the originals does not affect my evaluation of guitar playing because no lead play on the originals selected for this album remains in my memory. Even I don't remember well how Jimi played, or whether there were actually lead play parts on some of the originals. Moreover, as can be seen from the runtime of each track, solo parts have been extended on many of the tracks. Therefore, it's not like "what if Michael covers other guitarists' playing?" There is no subject of comparison to me. (Well, should Michael participate in a cover project where the songs are played with the same configuration of the originals, it must be interesting, too. I am not interested in other guitar players doing that, but Michael is absolutely different from other players, so some magic would happen there.) I had thought that Michael didn't like playing other people's material. But, regardless of whether he likes it or not, his playing on this album is more than anyone's expectation, I believe. Especially, the lead on Track 7 is one of Michael's coolest play in recent years. The solo on Track 1 is also brilliant. As can be see from their runtime, these leads are not so extended, compared to those on other tracks, but they are beautifully constructed with amazing, fast passages inserted in spots. I assume these leads were pre-arranged to some extent. If they were totally off the cuff without any preparation, I must say it's a miracle. On the other hand, the leads on Tracks 2, 6, 8 and 10 are more extended than the originals, and Michael endlessly and spontaneously plays improvised phrases as his emotion leads him. Such kind of long solo played by ordinary players including professionals tends to be monotonous not entirely but from part to part. But, none part of Michael's solos is boring. It's just like every part of the phrases has some meaning, which is a paranormal thing to me. And, as Gunter mentioned in his interview, Michael's play on Track 4 is also superlative, where such spontaneously improvized phorases are beautifully combined with many cool licks and repeat renditions taken out of his limitless magic drawer. You can also hear guitar harmonization with Wah on this track, which is really cool!

Regarding other members, Aynsley did really reliable and stable drumming with cool fill-ins as always. Gunter keeps tight performance all through the album. And Leslie as a guest never betrays his reputation. It is amazing that his phrasing with simple notes has such a presence that we can recognize it is HIS play by only hearing it.

In summary, I personally think this is none like the other cover album projects with a totally different concept especially in terms of lead guitar playing. I firmly believe it's a must CD for Schenker fans. 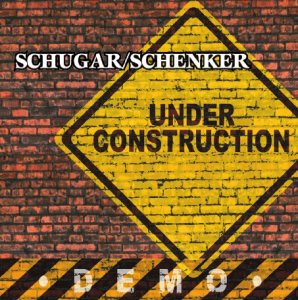 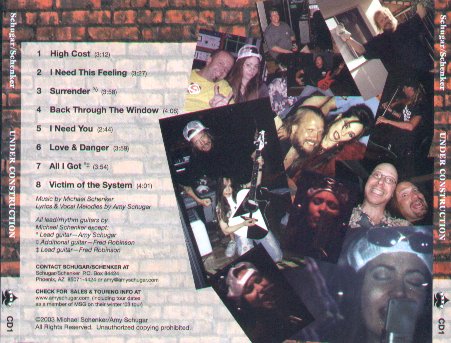 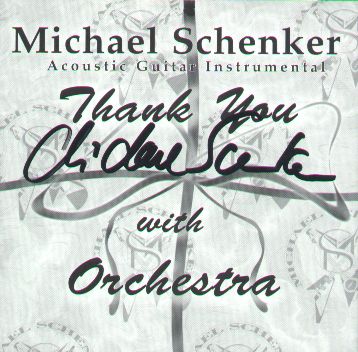 Music Written, Produced and Performed by Michael Schenker
Orchestration by John A. Costello III
Released in January 1999
(The above album jacket was autographed by Michael.)

This is a remixed version of Thank You acoustic guitar instrumental album released in 1993. It sounds like Thank You With Synthesizer, instead of Orchestra. To be honest, I like original Thank You album much better than this remix. Adding orchestration has made the sound thicker and warmer. However, it has made Michael's incredibly beautiful and adequate backing guitars relatively low (anyway, orchestration was not played by Michael). I believe that the original Thank You album had already been completed enough although Michael only used his acoustic guitars. I really love the original and at the time of its release, I was amazed again at Michael's enormous potential. Not only his matchless melody senses but also his fabulous backing guitars are condensed in the original version. In my opinion, this remixed version is a collector's item. If you do not have either of them, I would definitely recommend you to buy the original Thank You.--- (added 01/16/1999) 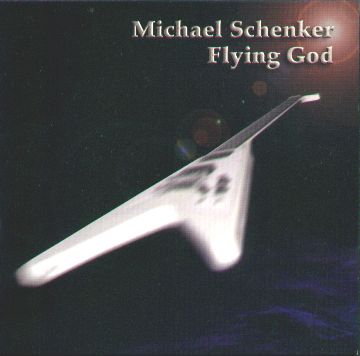 This is a compilation album. The songs were selected from only two albums which have been released under the Zero label (i.e., Walk On Water and Written In The Sand). It has nothing more than that. Unless you are a collector of Schenker related goods, you should not buy this album. You should buy both of the two source albums, instead. 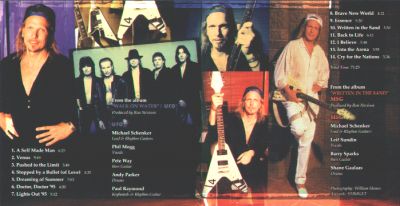 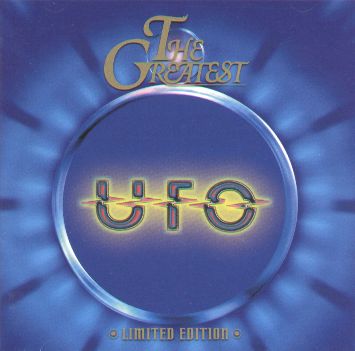 This is the greatest hits album of UFO released only in Japan, the export of which is restricted. The songs were selected from those released under the Chrysalis label. Since it is a compilation album, there is no need for review. However, my impression on this album is that "UFO with Michael Schenker is the best." This album contains some materials played by other guitarists than Michael (Track Nos. 6, 7, 8, 10, 11, and 13). Actually I heard these songs for the first time. I have had an interest only in UFO with Michael Schenker (although I have listened to the songs played by UFO with Paul Chapman in the BBC Radio Live in Concert album). They sound so thin and boring to me compared with the rest of the tunes played by UFO with Michael (many UFO fans get angry?). Michael created incredibly thrilling and miraculous phrases. 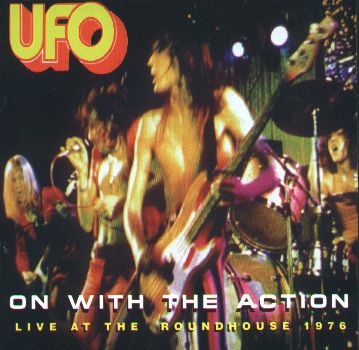 This is a purely raw live album which is completely untouched with no post-recording nor studio remix. It was recorded on the eve of a major U.S. tour during April 1976, just prior to the release of their No Heavy Petting album. Michael's guitar tone is cool as always and his lead play is thrilling as usual. Listening to this album made me feel that Miachel, Phill, Pete, Andy and "PAUL RAYMOND" are the best line-up for UFO as was proved in the Strangers In The Night album. Danny Peyronel's Keyboards works are unnecessary for UFO's music.

Note: I never meant to say that I look down upon Peyronel's keyboard playings. On the contrary, 'No Heavy Petting' is one of my faorite albums. I also love "Martian Landscape" which was written by him, and his keyboard playings in the song called "Belladonna". I think his keyboard works have a very strong characteristic, which is in most cases a good thing for professional musicians. However, I personally feel that his playings were in conflict with Michael's playings at least for live performance. This feeling of mine seems to be like my thoughts that I don't want Michael and Chapman to co-exist in a band (this is again my subjective opinion). 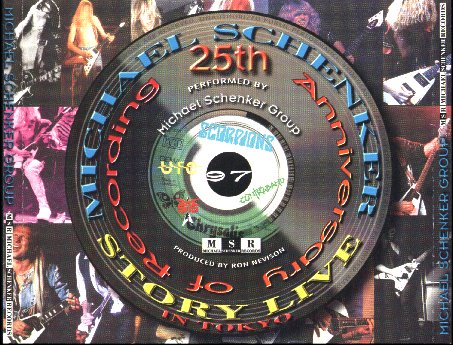 In memory of Michael Schenker's 25th anniversary of recording, his new album was released on May 10, 1997. This is a double-CD live album recorded during the March 1997 Japan tour. Its title is "THE MICHAEL SCHENKER STORY LIVE" produced by Ron Nevison. As its title tells, it covers the entire history of Michael - from Scorpions to present.

As can be seen from the following track list, this album completely reproduces their March 1997 concert in Tokyo. For my impression about the concert and Michael's guitar play, please refer to my concert report page.

Main Vocalist David Van Landing does not have his own strong characteristics, but did a good job in the concert. Many shouting singers cannot demonstrate their ability as much as they do in the studio album, however, Landing sang with clear and smooth high-tone voice in the concert. He was especially good at singing Clause Meine tunes. Bassist Barry Sparks proved that he is an incredibly high technician. His bass play in his solo part of Into The Arena is amazing, and his acoustic guitar work in Bijou Pleasurette is also cool.

This album is a great live album as a whole. If I am forced, I dare to say that there are a few minor things in this album with which I am not satisfied: (1) As I mentioned in the concert report, Michael's Cry Baby did not work well, and (2) The band somewhat lost their unity in guitar solo part of Rock Bottom which is the most important part of the song.