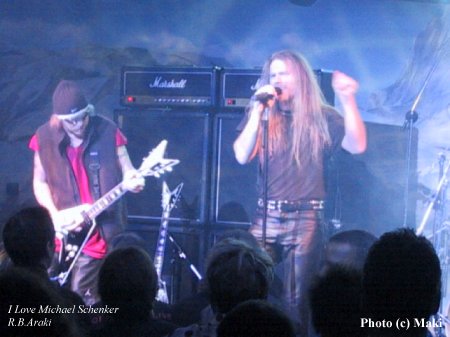 I'm sorry that it became so late to report about the MSG show at Alpenrock House, Kloten, Switzerland on Nov. 5, 2004. I wish I had better English skills to write exciting stories, but anyway, I do my best to give you the impressions which I had.

For the opening actor, Swiss heavy metal band Pure Inc., it was an important night to show their effort and success to their fans, family and friends. Quite many audience were already there when the door was opened. By the time when MSG appeared on the stage at 21:50, Pure Inc. brought enough heat and excitement in the whole house. At that moment, the billboard of the concert hall was indicating ' 400 visitors '. I'm not sure if it was true, but at least 300 people were there.

As other reviewers have already recognized through this tour, Michael's new Dean V had a tuning problem. ( or his supporter wouldn't prepare it well. ) At the beginning of the show, Michael shook his head and exchanged his guitar with another Dean V. ( He had two Deans on the stage. ) He carefully tuned it by himself. The members of MSG were very patient to wait till Michael was really ready. 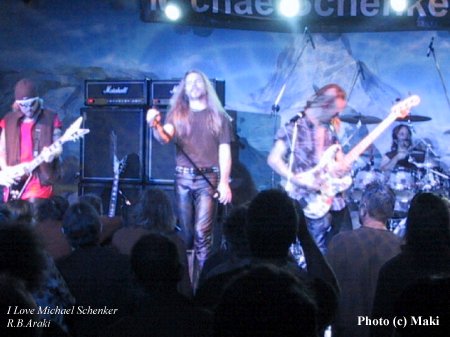 Michael played very clear and sharp. No big action, no talk, full concentration. The flow of the fingers were wonderful, precise and perfect like a classic guitar play. Since most of Swiss audience are UFO fans, when they listened the introduction of ' Lights Out ', the voltage of the excitement was doubled. Michael took off his sunglasses and began to smile. Through the rest of the show, he looked so happy and even sometimes sang chorus part by himself. ( Unfortunately, he did not use the microphone. ) Few times he was checking the condition of his monitors. I believe that he was satisfied with his new Dean sound. Definitely, he looked enjoying his own performance.

I personally felt that the condition of the mixing board wasn't good at all. Sometimes I couldn't hear Chris well. Chris himself seemed to be excited by the heat of the audience. He said that it was the best show since this tour had began. ( I don't know how many songs were played in Luzern, but it looked like this was the first show which they played the whole set since Michael had overcome his flu. )

Rev was running and jumping around the stage as if crazy. His bass play was also crazy hot and exciting, especially the solo of ' Into the Arena '. Indeed, he got the best attention of the audience.

Wayne was the biggest charmer. He brought the friendly atmosphere to the stage. Unfortunately, when Wayne was playing the introduction of ' Doctor Doctor ' , the mixing man made the volume of keyboard up and down. It was awful! Including the stage of Pure Inc., players were performing perfectly, but the mixer messed up their effort.

They played the whole set including 3 encore songs, ' Armed and Ready ' and ' Doctor Doctor ' then ' Rock Bottom '. Michael' s free solo of Rock Bottom was amazing! He was closing his eyes as if he was dreaming, but his fingers created sharp and strong melody. It was the highest sound which I had never experienced before. For a while, I could not move my eyes from his finger works. At the end of the show, Michael shook peoples hands, smiled and made a deep bow to the crowd.

After the show, Michael came to sign for the fans right away. He even signed on concert tickets or UFO records. Actually, he enjoyed to discover several rare UFO records. ( As I wrote before, many Swiss listen more UFO and Scorpions than MSG itself. ) Some people even brought his whole Michael record collections, but Michael was kindly signing on all of them. It was impressive! He was very friendly and let me take a ' Me and Schemer ' photo. His nose was still red from the flu, but looked very relaxed. My image of Michael Schemer was absolutely changed. He isn't a ' Mad Axeman ' any more. He has full of love and passion to his music, but off the stage, he was a very gentle and kind man with a self-confidence. 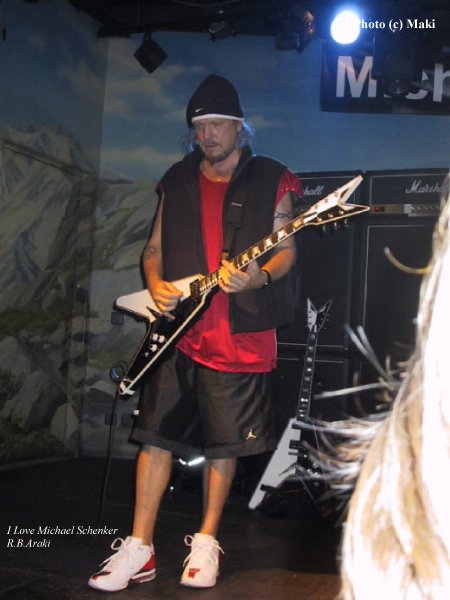 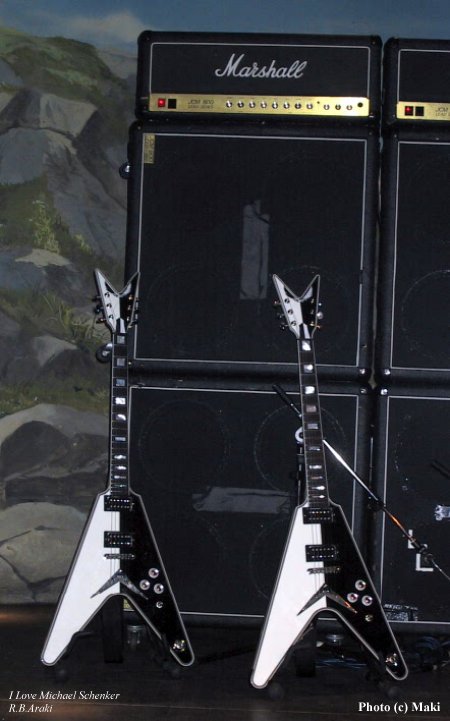 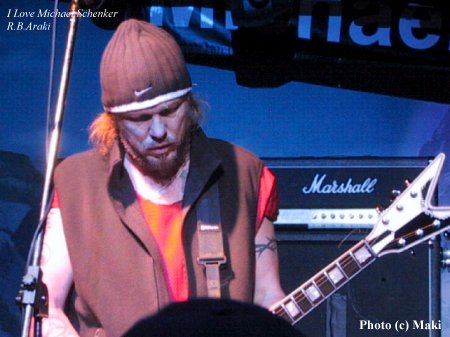