After waiting for over an hour in the condition like being in a rush-hour crowded train, lights was out and the show started with the introduction by keyboards for Cry For The Nations, the opening tune. Since it was not a magnesium kind of a start, my tension was about to lose momentum. However, when Michael wearing sunglasses appeared on the stage from behind his Marshall amps and started playing riffs for that song, the audience suddenly went into a state of feverish excitement. Oh, my master! I saw him for the first time since January 1999. I succeeded in securing the second or third row position, and moreover, there was nothing obstructing my view in front me. I was lucky enough to be able to see Michael from his head to toe, at such a close distance. With his Flying V with dot inlay, Michael was playing the riffs swinging his body with his knees bent a little bit. Michael wearing a thin black mesh shirt was looking very fine. Turning into a solo part, he did neck-bending at the 22nd-fret position with his middle finger so easily as always. That solo sounded rather similar to the original one, which made me feel like crying. He also used the Wah-pedal excellently. Wow, I could see so clearly his fingering and pedal-footing! I was again moved. However, only I could heard was Michael's sound from his Marshall and drums. Everyone around me didn't care such a thing. In their eyes was only Michael. Me, too, of course.

The second number was Let Sleeping Dogs Lie, which took me by a little surprise. Of course, Michael played its introduction with Wah, which made me feel so good. As he stepped on the Wah-pedal, his mouth became open. I was strangely convinced that it was not only me who open mouth when stepping down the pedal. However, I could see a green chewing gum in his open mouth. It looked a bit unbecoming, but in that situation, I welcomed all he did. They then burst into the third number called Rock My Nights Away. Audience's voltage got on top as early as at this moment. At the middle part of the song, Michael did a switching technique where he moved pick-up switch quickly with the zero volume for front pick-up as he did in the Rock Will Never Die album. Cool! Again, he played a similar solo to the original, which made me feel happy but something different from the usual cases. He was still looking very good.

Without any break, they started playing the 4th song which was Three Fish Dancing. I had heard they were going to play something off of Adventures Of The Imagination. Oh, this one! Before the gig, I could hardly imagine how he was going to play the materials from AOTI because there were so many guitars overdubbed in the album. However, the song was very cool with one guitar (actually, Wayne Findley played guitar, too, but I could not hear that). As a whole, he played as he did in the album. In this song, hi did lots of octave techniques which made the sound thicker. This technique has been one of the characteristics of Michael's playing since The Unforgiven album. But, wait! I had thought when doing this, he used any of his unused fingers plus pick, but I could see clearly how he hit the string and he used only the pick if my vision was operating correctly! That means he muted the middle string with his finger of the left hand and hit the three strings altogether? I was surprised. Or is it a common sense? Three Fish Dancing was a starter of the instrumental section followed by Captain Nemo, Essenc, and finally, oh yeah, Into The Arena. At this point, the audience was shaking the venue. At the middle part of Into The Arena, Barry and Shane played very tight and cool as always. I could hear the bass sound for the first time during the show. I forgot when, but one asshole threw a P.E.T. cup onto the stage which flew about one meter apart from Michael and was immediately collected by the guitar technician. A bad memory came across my head. But, Michael continued to play as nothing happened. What a relief!

Keith Slack was again back on stage and they started playing Written In The Sand, and without taking a rest, continued to play Pilot Of Your Soul, In And Out Of Time, The Mess I've Made, Hello Angel, and Fat City N.O., all from the Unforgiven album. It seemed that during these songs, an uprush of the audience was not strong enough maybe because of the relative lack of their penetration to the audience compared with the older MSG materials. Michael used Wah-pedal more than I expected. Moreover, he did it more like a literally Wah-Wah way, instead of using it to control tones as he traditionally did. Given his playing in his albums released in the past few years, I never expected him to use Wah-pedal for the materials from the Unforgiven album.

There was almost no MC for this show. After finishing the Unforgiven series, they again, without a break, moved onto the next song which was, Gosh, Looking For Love. The audience was again heated up. They then dashed for the ending of the show with On And On, Attack Of The Mad Axeman, and Armed & Ready, the final song. Of course, all of the audience were singing together as loud as possible.

They left the stage. Then, Tonio, tour manager appeared on stage and led the audience screaming for encore. Tonio walked off the stage saying ORIGINAL Michael Schenker of the 1970s. The band members again got on stage. "Where is Michael?" At the first glance, I didn't notice Michael. He was wearing long blonde wig!!!! He also changed his cloth to a silver dress. First of the encore was Too Hot To Handle, the first number from UFO of the night. I reconfirmed that this was a great song. Michael was singing "Too Hot..." against the microphone. Very pretty! The very last song of the show was Lights Out. Then, the accident happened. One of the strings (maybe 5th) was cut! Gosh! A guitar technician immediately changed it to another Flying V with block inlay. However, this guitar didn't work well. Probably due to the circuit anomaly, the rear pickup produced no sound, which forced Michael to play with the front pickup only, thereby making the sound very untrebly. Michael sometimes moved the switch in vain. If I had been him, I would have gone mad. Worthless back-up! Although the technician was waiting holding the guitar with a new string at the end of the stage, Michael never again saw him and played latter part of the song including the 2nd solo using only front pickup. However, Michael never showed angriness or any kind on his face. He waved his hands to the audience and left the stage. All through this 1.5 hours, I really had a wonderful time. 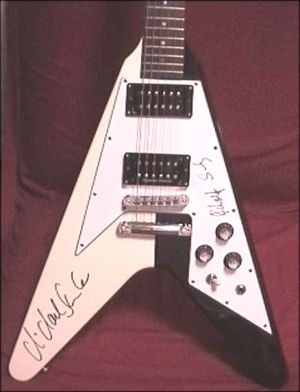