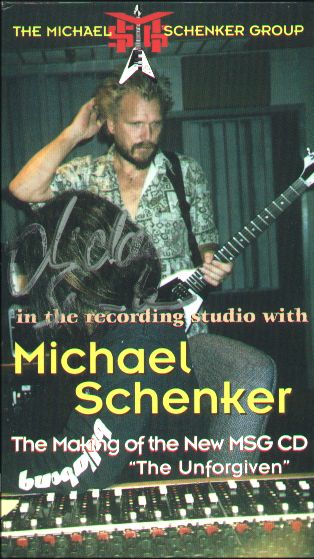 This video was shot during the rehearsal and recording of MSG's next album "THE UNFORGIVEN". Since this is not a pro-shot video, you cannot expect too much. HOWEVER,

1. You can see how they rehearse and record the album, which is rare to see. Michael rehearses in a very relaxed way. Everybody in the band looks quite fitted in with each other.

2. You can hear lots of Michael's outtakes and alternative lead plays, all of which are cool.

3. Also, you can guess how good the album will be. It will be heavier than the previous studio album "Written In The Sand". My first impression is that this album is based on Michael's great riffs. Of course his solo is great, but he is the king of riffs. It seems that Kelly Keeling is a David Coverdale-kind-of classical singer with straight shouting vocal. I feel he suits MSG.

4. Additionally, you can see private shots of Michael and Linda loving each other. As you can see from the video package, Michael's hair is back to short and original blond which I love. He signed the cover in front of me on January 12, 1999. He looks cool and fine.

I have got a message from Michael J. Petro of PetroSneef: "Michael Schenker's current rhythm guitarist/keyboardist, Sneef Mitchell (aka Seth Bernstein) now has a side-project (PetroSneef) web page. It can be found at http://www.clubhousewreckards.com. Give us a link for your bios! Also check out some comments of his about the about-to-be-released studio album, published at Tristan's site. You have Sneef's permission to paste those onto your site as well...

Here's Sneef's comments: "Rehearsals started on October 10th in Cotati, California. These sessions lasted for 10 days up until recording the album. It was a very relaxed atmosphere and we basically worked out parts Michael had already written. We had about 14 songs in all, I think, but 12 were selected. The music is definitely heavier than "Written"; and often reminiscent of classic Schenker. As to why Shane and I are the only remaining members; Barry Sparks was touring with Billy Myers, and Michael decided on a singer other than David Van Landing. The contributions were made as a collective effort, and all ideas were considered. Michael was a pleasure to work with. Very cheerful and agreeable. I actually haven't heard the album with all the parts mixed, including mine.(believe it or not!). The album will be released February 15th,'99." 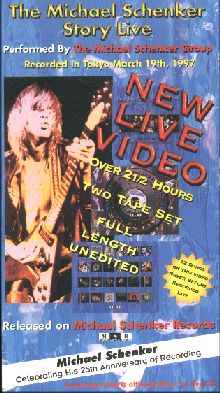 This video was recorded on March 19, 1997. Yes, I was there! Of course, I have Story Live CD. However, this video has renewed my memory and brought me another sensation. You can again realize that Michael's performance on this day was really fabulous. He looks very healthy, too.

Although most parts of the video were shot with one retained camera, it is really excellent. The sound is not Hi-Fi, but it is very clear, probably too clear thereby lessening its 'live' feelings.

My impression on this live can be found in my concert review. Also, although this video's audio recording is different from the live CD, my comment on the CD can be applied to this video.

Back to "Albums Review" page
Back to "I Love Michael Schenker"