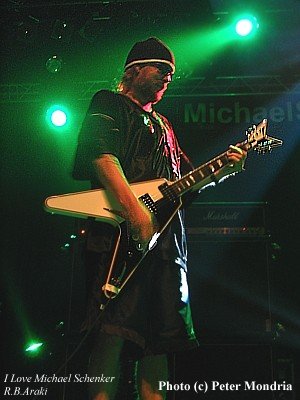 Opening band was Pure Inc. from Switserland. They took the stage for about an hour. Their music can be discribed as metal/rock. They really didn't sound bad, but the crowd was not very responsive during the first half of their performance. With enthusiasm the singer is trying to get through to this skeptic audience, and he succeeded. Highlight was their final number 'Fallen Season' (...and no, not because the show was coming to an end ;-))

After about a thirty minute set change, the lights dimmed. Michael came out on stage first, and walked towards the middle of the stage. While the other guys were finding their positions, Michael makes some funny squeaky sound with his fingers touching the strings. At the same time he laughes a little naughty... that set us off laughing. He walked to his pedals...says nothing, smiled exhaustive, makes a deep bow to the crowd graciously and kicked in with 'Ready To Rock'. What a guy!

He was playing his Dean during the whole set again and become more conversant with his instrument than the night before. The sound was very clear and sharp again. ...In my opinion he creates the same old 'Schenker sound' as always! He had some little problems so now and again and his suppleness wasn't there all the time, but his solo's were absolutely emotionally appealing and sensitive. I do not miss the Gibson as far as that goes...at least...concerning his live performances. 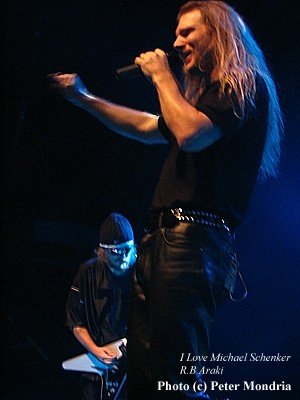 The atmosphere was good, from the start the audience was responsive and the whole band enjoyed themselves perceptible. Michael had much more interaction with the rest of the band in comparison with the night before. I was standing at the front row, facing over against Michael and it strikes me that it was almost impossible to hear Chris voice from that spot. Some guys around me were yelling, 'Chris we can't hear you'. I think it wasn't a technical problem but it had to prove everything with the place we stood. Rev was running, jumping and rolling all over the place shaking his dreads around his head all while playing the bass in that perticular unique way with both hands up and down the neck. He's a show within a show. Chris vocals were near-perfect throughout the night, he sang all the old and new songs very convincible. He was concentrating and wholly engrossed into the music during the whole set. Really great to see! Wayne also did a great job, he's always smiling and had a great time. He's a big showman and threw every possible rock star pose. He used his rhytm guitar as a rocker! Tight, sharp and go for it!.

An hour before the Bochum show on wednesday I talked to both of them Wayne and Chris. We talked about the tour, MSG and...web design. Really nice guys! A friend of mine took some nice pics of us meanwhile (thanks Lucas!).

The show passed off stainless. There was only one strange moment...after finishing 'Rock'n'Roll Believer' Michael put down his guitar and walked backstage. No idea where he was going or what he was doing. Everyone looked at each other asking. Two minutes later Michael came back and the show continues with Arachnophobiac. Strange and remarkable! MSG didn't played the whole setlist...again! Three songs were sadly missing: Into The Arena, Armed & Ready and Fatal Strike. (thanks for the info Frank!). The encore was Doctor, Doctor. The night ended on an absolute high with Rock Bottom. Immediately after Rock Bottom, Michael walked along the stage, shaking peoples hands, You could really see how much he does appreciate the fans. With a smile and applaus from him he leave the stage. I met Michael after the show, he signed my recently purchased World Wide Live dvd. He was friendly and talkative. 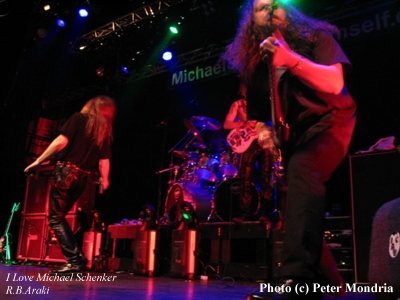 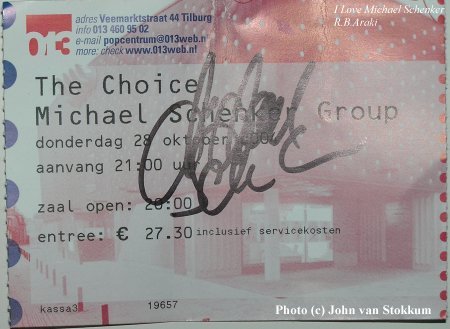 Last Thursday i went to the MSG concert in the 013 concerthall in Tilburg/Holland.

The gig was not as good as i expected, because of the sound mixing of Chris his singing.

I stood right in front of the stage, and there the singing of Chris was not good to hear.

Therefore i mentioned this to Chris (during the concert between 2 songs) and he replied that in the back of the hall, the sound was good.

Further it seems Michael was sometimes "absent" during the concert , but because of this, he played extremely well.

The other members of the band played very well and enthusiasm. 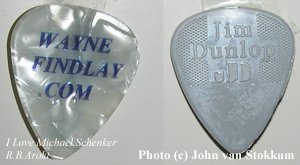 After the last encore i catched a plectrum of Michael Schenker himself (unfortunatly without his name), and the setlist of a roadie.

I also take hold of the floor-plan of the stageformation from the soundmixdesk.

After the show during the signing session (only Michael), Michael signed mine Thank You 4 CD and he also signed mine ticket and the setlist.

After the signing session of Michael, when the 013 hall was empty, i also talked to Wayne Findlay.

He told me that the night before in Bochum, Michael was playing not as good as this evening.

Wayne also signed the setlist and he also gave me his (last) plectrum.

Wayne is a very normal chap.

After all, it was a very nice evening.

A great UFO/MSG fan from Holland 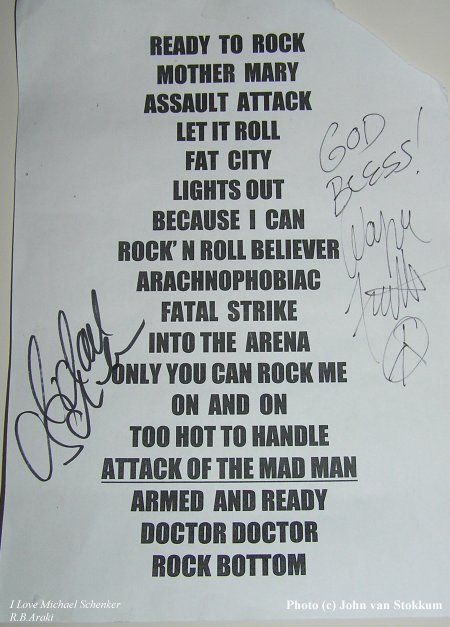 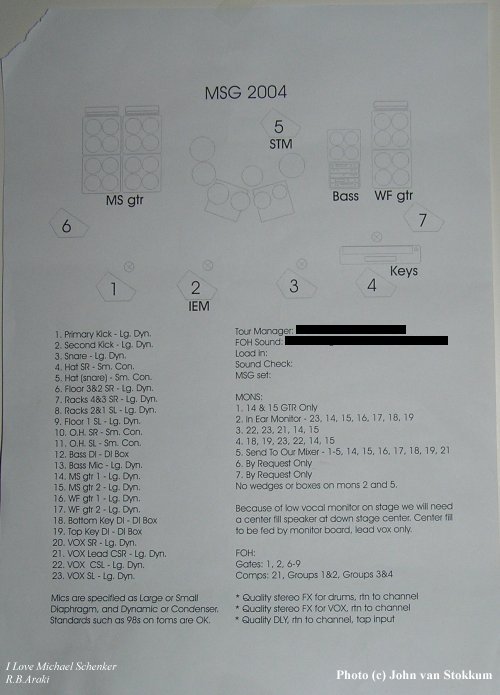