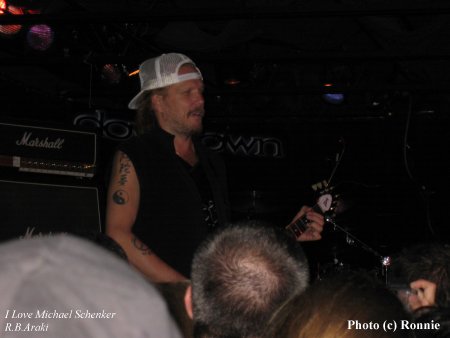 Hey what's up all just wanna say that the uli schenker show at the downtown here in new york was unbelievable. the house was packed and schenker kicked major ass and he was all smiles. A young lady from the crowd pushed her way onto the stage and asked if she could jam a tune with the band, schenker was totally into it, so they saddled her up with an axe an she jammed some solo parts in rock bottom, she was a pretty good player she hung right in there, schenker was loving the whole thing, and it definitly made her day. The night was definitly memorable and the sound was awsome probably one of the best live mixes I have heard for schenker in awhile. Enclosed are some pics from the night.

(Additional Comment)
hey thanks to you for keeping such an updated schenker site michaels personal site isn't even up to date, as to the girl I didn't notice her mother and as far as the girl goes I would definitly have to say she looked older than 14 she looked about late 20's early 30's, hope that's of some help to you. Keep up the good work and I promise every time michael is in the new york area I will inform you on the show. P.S since you love schenker so much you may want to check out my band I think you'll really like the tunes some extensive solos and definitly an old school feel, let me know what ya think.
http://www.garageband.com/artist/urbansnake 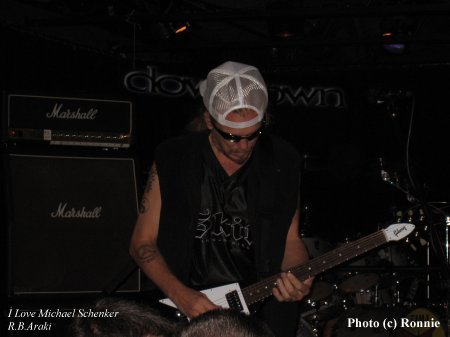 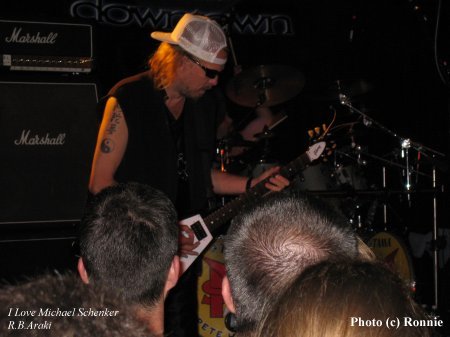 Love your site. I was at the show Sat. night at the Downtown. My husband spoke with the young girl that jammed with Michael. Her name was Christine. She had sent Michael a video of herself playing his songs. When he recognized her in the audience, he had a roadie bring her up, as he knew she could do it....and do it she did! Michael looks great, and really thin! You can't tell in photos because he wears these baggy clothes, but when you meet him up close (as everyone does, since he stayed to sign and pose till about 3:00 a.m.!) you can really see how good he looks now. The beard is finally gone, and he was smiling and looking happy the whole time.

As far as Uli, I thought he was great. The effort involved when he played Vivaldi must have been tremendous...he played non-stop through the whole classical set. The screen behind him was not "4 women in white dresses playing violin" as some twit wrote on a review. It was Uli himself playing with the Sky Orchestra. In front of the screen was Uli on stage, playing right along with the film. Since he was dressed the same, I wonder if people with a few drinks in them were thinking they were seeing Uli super-imposed on the screen. (I even thought that at first until I noticed his face on stage wasn't making the same expressions as the face on the screen)

All-in-all, a great show, and for now, it seems like Michael is doing very well. I think after that article and interview in Guitar World this past April, all his fans have come out to show their support. "The place was packed" is an understatement! Getting to the restroom was just about impossible. I have never seen so many people crammed into a club!

Keep up the great work!
Stephanie