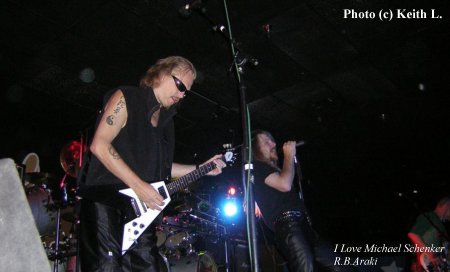 Anticipation was high as we drove the short trip at the prospect of seeing Uli and Michael on the same stage, on the same night, after waiting so many years to do so. It had been 19 years since Uli had toured the States, and 9 years since I last saw Michael on the "Walk On Water" tour, and given the tempermental nature of Michael through the years and given recent circumstances I must admit there was a slight bit of doubt over how this show would stack up to other shows in previous years, but I'm happy to say this was an incredible show!

Opening the show at Graham Central Station this evening was a local band Systemic, led by local shredder Michael Lee Ostrander, whose short 4 song set started the proceedings off on a heavy note, plying a brand of energetic semi alternative thrash, which although isn't particularly to my usual taste, actually were pretty good for this type of music, albeit hampered by a poor mix, but they seemed to warm up the crowd fairly well.

After approximately a half hour break, Uli finally hit the stage, the blistering opening notes of "Sky Overture" drowning out the house music. Splendidly elegant, dressed in a black and gold waistcoat, topped off with a black hat adorned with purple plumage, Roth cut a striking figure, looking more like an 18th century nobleman than a rock guitarist. But the sounds emenating from the master of the Sky Guitar certainly proved otherwise, as Uli put on a masterful performance, moving from Vivaldi's "Four Seasons" to the Scorpions' "Sails Of Charon" without missing a beat, stopping along the way to play an incredible version of the Electric Sun classic "Hiroshima" before ending the set with a rousing version of "All Along The Watchtower", supported all along by the incredible visuals projected upon the screen behind him, creating an amazing audio/visual experience. While it would've been fantastic to see Uli with a full band, he was more than ably assisted by keyb oardist Oliver Polatai and rhythm guitarist John Boswell, who remained largely off stage behind Uli's Marshall stack throughout the set. Despite the stripped down lineup the sound was surprisingly rich and full, and the guitar cut through with amazing clarity. What an amazing display of guitar virtuosity, and well worth the 19 year wait, although hopefully it won't be anywhere near that long before his next tour of the States! During the break, I was able to talk with Uli for several minutes, and found him to be a gracious, humble and friendly person, traits which so many lesser talents would be well advised to emulate. 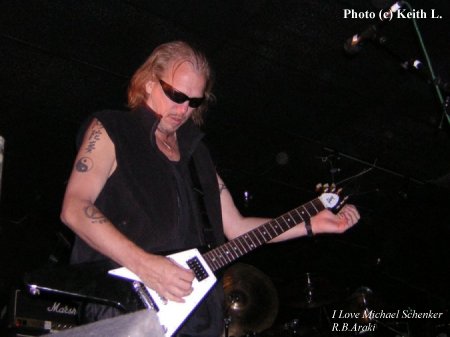 After another break MSG came on, and any previously stated doubts immediately melted away as Michael was in top form, playing as well as I've ever heard him before, and equally important seemed to be truly enjoying himself this night. Opening with "Assault Attack" the band was tight as a drum from the beginning and didn't look back throught the 90 minute set which was surprisingly and pleasantly comprised mainly of older MSG and UFO songs, which were great to hear live once again, punctuated by a few songs from "BOAS" and "Arachnophobia", of which one of the highlights was "Rock And Roll Believer" which featured strong vocals by Chris Logan and an excellent solo from Michael. Speaking of Chris, there has been unjustified criticism concerning his vocals in the press, but I happen to believe he did more than a commendable job in handling the older songs, although up until around the midpoint of the set his vocals were buried too low in the mix, making them barely audible at times over the backing, but once this was finally rectified his power came through loud and clear. Having said that, Michael's sound was fantastic, loud but incredibly clear, as was the rest of the band. After the regular set, there was to be but one encore this night, but when you get "Rock Bottom" as the song of choice, one really can't complain! Of course, the fact that the venue was probably only a third full most likely contributed to this, but if the band was disappointed at all in the relatively small turnout they certainly didn't let on. Word to promoters and club owners: If you want a huge turnout then you need to advertise! All in all though this was an incredible night of virtuoso guitar playing that was well worth the wait!

Thanks once again for maintaining your fantastic site Ritchie, and for posting the pics and review. Also, if you're interested in melodic hard rock, if I may I'd like to shamelessly plug a project I'm currently promoting, a band by the name of Rage And Beyond, whom are represented by a dear friend of mine, Jim Manngard, who was Ritchie Blackmore's manager for approximately 10 years, and have just recorded their debut album (website to be launched shortly) which I'm really excited about, bluesy hard rock in the vein of Blue Murder/Whitesnake with incredible vocals courtesy of Ed Terry very similar to Glenn Hughes. If you're so inclined, their debut video can be viewed online at www.ekoproductions.com. Just click on the video link and they're the featured video. I'd be interested in your opinion, when you get the chance.

Best Wishes, and keep in touch, 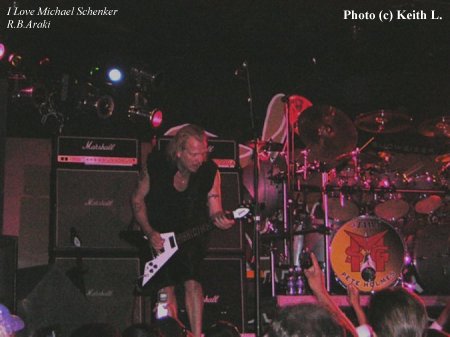 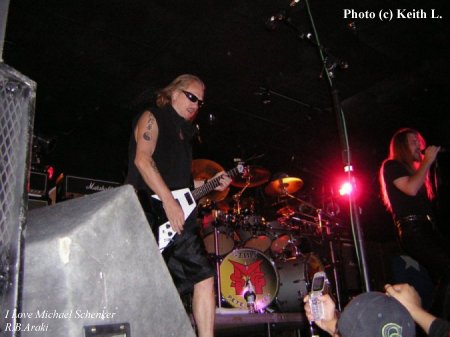 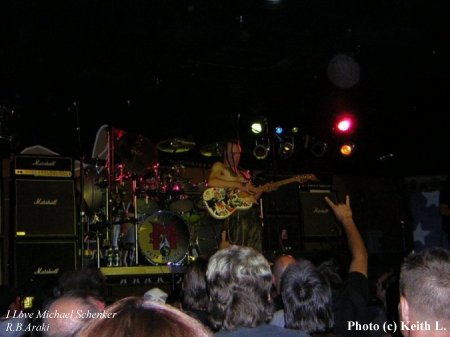 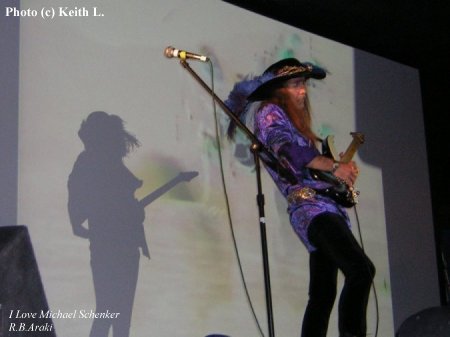 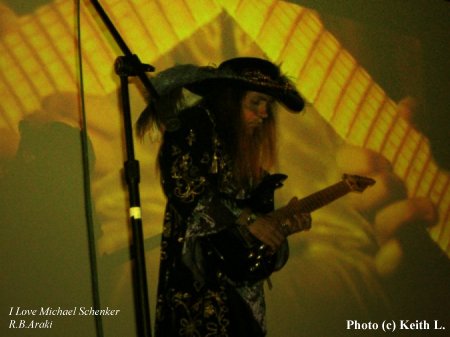 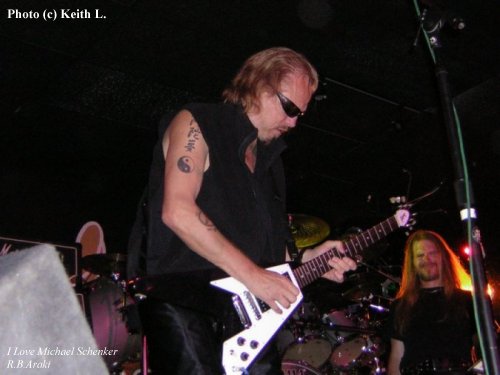 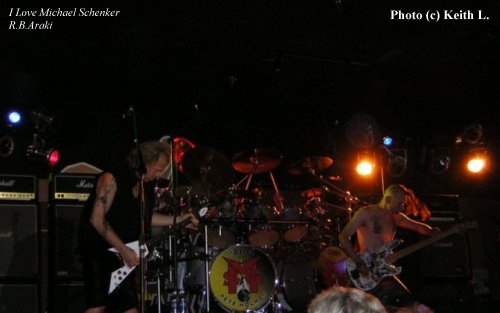 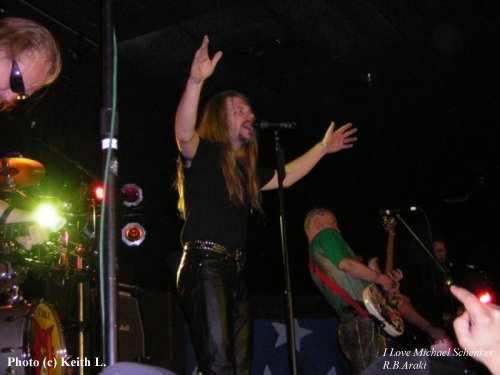 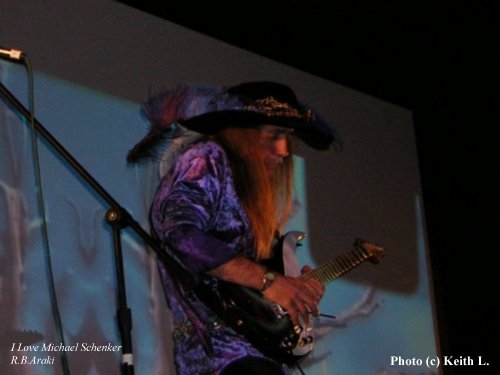