We got up on Saturday morning and headed for San Antonio from New Orleans to see MSG and Moxy at the Sunken Gardens. The opening act, Jokestar, is a local band from San Antonio that I had seen before. They were really tight and sounded good. They played some covers and originals. All sounded good.

When MSG came on it was still daylight. From the opening song, Ready to Rock, you could get the feeling they were ready to rock. The sound was a little low, but got louder as the show progressed. This was the first time that I saw this lineup and I was impressed. They ripped through all of the MSG and UFO classics (not all but alot). On and On, Attack of the Mad Axe Man, Assault Attack, Armed and Ready, Let it Roll, Only you Can Rock Me, Lights Out, Too Hot To Handle, Doctor Doctor, and a few songs off the new album (anarc sp?). I have to apologize for not having that album (yet). We kinda get neglected on new releases from the true rock bands in New Orleans, but I'm looking for it. For some reason, I seem to think he played Lost Horizon but my memory isn't what it used to be. One of highlights of the show was Into the Arena. I don't know who the bass player was, but he did one hell of a solo during it. Just when you think its all over (after 2 encores), the man comes back out and does Rock Bottom and it sounded incredible. I hadn't seen him since I lived in LA in the late 80's, and I thought he sounded every bit as good , if not better than any time I had seen him previously. I was at the concert with a 16-year old budding guitarist who hadn't had the pleasure of seeing Michael play live before. He was a fan so he knew the music, but he hadn't had the full treatment. After Rock Bottom as we are walking away from the stage, he turned to me and said that was the best guitar player he had ever seen and I've been taking him to concerts since he was 10 and he has seen just about everybody. To top it off, Michael set up camp and was meeting people and signing Thank You 4 cds (which by the way sounds as good as expected). If was quite an experience for both of us to shake hands and speak to the man. In all fairness, I have to say that when Moxy came on, they were on their game. Earl Johnson (guitar) was on fire. It was the best I'd ever seen him play. I guess following a master like Michael gives you extra powers. they had a new singer who was quite good and sounded more in the vain of their original singer Buzz than their previous replacement. Budgie was last, and sorry to say I wasn't very impressed and left after a couple of songs. Maybe it was because I'm not familiar with there music or maybe I didn't want to hear anymore after the 2 spectacular performances I had just witnessed. The crowd during MSG and Moxy were very responsive and enjoyed it completely, as was evidenced by the line to meet Michael. Hopefully it won't be so long before he comes back to the south (maybe even Fat City). 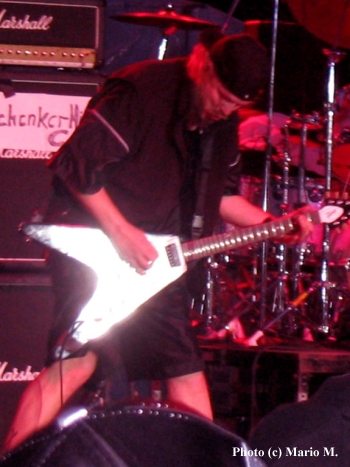 I was very excited to see MSG, and Michael for the very first time. The band hit the stage around 6pm, opening with Are You Ready to Rock. The crowd was more than ready, and the band did not disappoint. As night fell, Michael and co. tore blazed through song after song, playing songs both old and new for the metal faithful.

They played UFO and MSG classics, as well as songs from the most recent album, Arachnaphobiac. Hearing Armed And Ready, Attack Of The Mad Axeman, Assault Attack, On & On, and Into The Arena was a real treat. The newer songs, Rock 'n' Roll Believer and Arachnophobiac, sounded pretty good as well. But the UFO songs smoked! Doctor Doctor, Too Hot To Handle, Only You Can Rock Me, Lights Out, and Rock Bottom brought the crowd into a frenzy.

Seeing the guitar virtuoso at the top of his game was a tremendous joy for me. He looked very comfortable onstage, and played effortlessly. I had not heard Chris Logan sing before, but he sang the older songs as if they were his own. Rev Jones, the bass player, had a TON of energy and excitedly jumped around the stage during each song.

All in all, it was an amazing show. The band left the crowd screaming for more, even after the 2nd encore. Michael was gracious enough to stick around and sign autographs for the many, many fans after the show. Sadly, I forgot to bring copies of my CD's for him to sign. However, I was able to take some pics during the show of Michael.

Overall, the three bands (MSG, Moxy & Budgie) put on a great performance for the San Antonio faithful. Hopefully, MSG will return to San Antonio in the near future. The heavy metal fans will be ready to welcome Michael again with open arms.