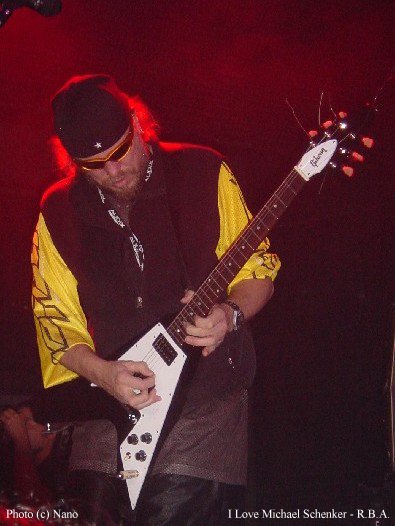 My name is Nano and I was in the MSG concert in Barcelona, maybe the best concert I've ever attended. It took place in Bikini, a small venue that was crowded with 500-600 people, most of them in their thirties. I was lucky to be in the front row, only one or two meters far form Michael Schenker. He wore short trousers, sunglasses (only in the first three or four songs) and a cap with a white star. He seems to be in good shape and in his mood was definitely excellent, grining and winking his eye at the audience and bowing and waving after every song. His playing also was excellent. Only the solos of the new songs were different (especially the outro solos) to the ones of the records. The sound was also good (especially Schenker's guitar, but from my position Chris voice didn't sound very clear (who cares? I can even read his lips!). Also, was remarkable bassist attitude: he spent the whole concert jumping, doing weird movements and cheering the audience, but without losing one note!

They played UFO songs (Mother Mary, Lights Out, Let it roll, Only you can rock me, Too hot to handle), songs from the first MSG albums (Are you ready to rock, Assault attack, On an On, Attack of the mad axeman, Into the arena) and from the recent ones (Fat city, Because I can, Rock and roll believer, Aracnophobiac, Fatal Strike), and also the encores Armed and ready, Doctor doctor and Rock bottom. Almost two hours in paradise! 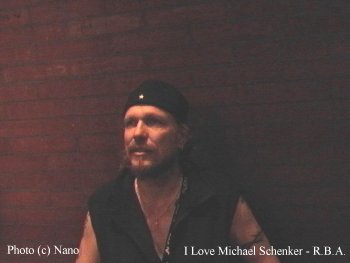 After the show I had my copy of Thank You 4 signed by him. He was very kind and friendly with the fans, we took some photographs and he even didn't mind to sign my UFO Walk on Water t-shirt (just on top of Phil Mogg's face!) Next Saturday I'm going to be at the Uli Roth-UFO show here, in Barcelona. If it was half as good as MSG concert, I'd be satisfied enough!