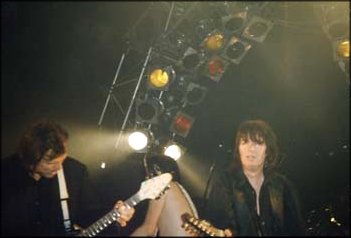 When I was in high school back in the early '80s, I went to see Michael Schenker's gigs whenever I had a chance. I even made trips to different cities which was a great deal for a high school student. Knowing of his alcoholism and drug abuse, it seemed most likely to me that he was going to vanish into thin air some time soon. Little did I imagine that I would see him with UFO in London after 17 years!

Having seen his new image on the web, I have to admit that I wasn't 100% convinced that it was Schenker. I was under the suspicion that he had left the band again and somebody else was playing his perfect copy. I know I was being a little paranoid, but after all, I was travelling from the far East. He'd better be Michael!

Before I go further, you should know that my report is very biased. Having located myself so close to the front and to the left, all I did was concentrate on Schenker. Plus, I'm only 5 feet 2 inches. The crowd was a bunch of huge guys; I could not move!

The opening sounded pretty much like the one in the Strangers In The Night album "Hello, London, would you please welcome home, UFO!" Then they ripped into Natural Thing. Michael was wearing a long coat which I think was made of wool, and a suit and a shirt underneath it. He was literally a Man In Black! The venue was already steamy hot: how does he do this? In fact I've wanted to ask this question ever since the early '80s when he was in black leather jackets onstage. Although I still was not convinced that the guy was Michael, the guitar he was playing was the true Schenker sound. Who else could play like this? Eventually I had to admit that the guy with the black hair and shades was Michael Schenker. During the third song, A Self Made Man, I noticed something very odd: He was wearing black and white nail-polish, alternately on each finger. I know it is totally irrelevant to his music, but what's gotten into him!?

The next song was Electric Phase. Michael did an excellent job on the slide guitar. He was switching fingers really quickly, moving the slide back and forth. It sounded very smooth and I didn't notice any gaps in the sound when he was switching. The guitar solo in This Kids was superb! After this song, he took off his shades. It was about time! Yes! I was waiting for this moment ever since I saw his new image on the web. It was Schenker for sure and he was smiling. Then they played Out In The Street, which had another excellent solo. It was almost note perfect yet very emotional and melodious. The crowd went crazy and pushed me even closer to the stage, which made me even happier. 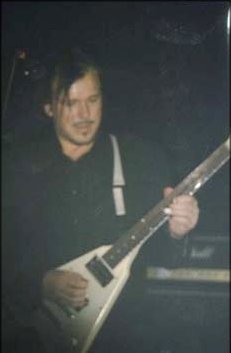 The next song was One More For The Rodeo. Michael's guitar sound behind the vocals was as smooth as flowing water. It wasn't until this gig that I had realized how good this song was. This, I think, is why musicians have to go on the road and play live. Then Venus and Pushed To The Limit were played. They played the first 3 songs of the WOW album. I think Michael played more or less note for note what is on that album. This is pure speculation on my part, but maybe it is because the crowd in Europe are not familiar with those songs yet and Schenker has not played them over and over thus not tired of repeating the same phrase yet. The flier they handed out at Astoria said, "New Album Out Now!" even though it's been out since 1995. Then on to Love To Love. I tried my hardest to take pictures of Michael playing two guitars back and forth but what could I have done under that condition? It was incredibly packed! This is another fantastic 3-beat song. I'm a great fan of Michael's 3-beat songs, which are a really unusual beat in rock music.

The next up was Too Hot To Handle. The crowd sang every word along with Phil, so did Michael and Pete! They shared the mike and sang the chorus. It was obvious that Michael was having a good time. After THTH Phil went "Only you can--" then the crowd went "--Rock Me!" They really went wild. I actually felt the floor bouncing up and down from their jumping around. It sounded like everybody in the venue was singing together. We rocked! 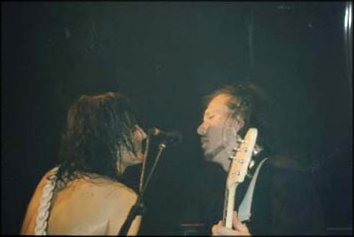 Lights Out was the last song of the regular set. The intro and the guitar solo sounded pretty much like the one in the WOW version, more than Lights Out album version. At the end of the first guitar solo, it seemed that Michael got carried away and Phil couldn't sing when he was supposed to. They ad-libbed. Wow! This is Live! Michael laughed somewhat embarrassedly which I thought was very cute!

The first encore were Doctor Doctor and Rock Bottom. The whole crowd knew that DD was on its way and they went wild by just a couple of notes from Paul Raymond. It was unbelievable. Being small and jostled so hard, there were times that I actually couldn't breathe. Plus the elbows of big guys sometimes hit me in the head as they waved their arms around! Then it was straight into Rock Bottom. I love this intro, but then again, who doesn't? But as far as the guitar solo is concerned, I must say it was just a little disappointing. It seemed to me that Michael had a problem with the volume at first. I'm not sure whether it was part of his technique or if he was just trying to fix it. The rest of the solo and the song were dazzling. Michael and Pete sang the chorus, sharing the mike again. Michael was in high spirits, crouching low then jumping high over and over, and smiling the whole time!

The second encore was Shoot Shoot. Again the crowd sang every word with the band. It had Michael and Pete singing again. Come to think of it, it is interesting to realize that all the songs they played for encore were from their very early albums, such as Phenomenon and Force It.

If my memory serves me correctly, Love To Love and Rock Bottom were the only songs where Phil, Pete and Michael got closer on the stage. Other than that there was no interaction between Michael and Phil. Michael rarely strayed from the left hand side of the stage, which was fine by me. During the whole live, Phil and Michael's eyes never met once. How on earth do they manage to make such magical sounds onstage or even in the studio!?

Unfortunately, there was no autograph signing session, I was very happy to be able to see him so closely. He was only a couple of meters away! I wanted to listen to Let It Roll, On With The Action, or I'm A Loser (off the top of my head), but you can't have everything, right? I'm glad I have three tickets for Tokyo in April. Who knows, maybe they will play those songs... It was truly an unforgettable night and definitely the highlight of my trip to London. Thank you UFO and see you in Japan!!!

Thank you very much for the report and nice pictures, Mayumi!!
Back to "Concert Report Top"