Unlike the case for the Yokohama show two days ago, the number of my ticket for this show was not good. Since in Yokohama, I was so close to Michael and could hear only his sound, I secured the position at the middle of the hall so as to hear the sound via PA. Because same announcements were made and same songs (from Thank You With Orchestra) were played before the show, I failed to well uplift my spirit.

The show was going on just as it was in Yokohama including the setlist. I could hardly see Michael. His upper body peeked occasionally from behind the crowd in front of me. Instead, I could clearly see other members, especially Keith. However, I could realize Michael was looking fine that night, too. The audience was getting higher and higher.

With regard to the sound balance, I could hear Michael and vocal rather clearly, but felt that Wayen's rhythm guitar and keyboard were a little low. Barry's sound was not low, but lacked distinctness a bit probably due to the audio sound system. A little too detailed, but I felt Michael's Wah-ed sound could sometimes not be heard clearly. But, anyway, they as a whole sounded much better than those of the standard hard rock/heavy metal bands.

With regard to the playing by other members which I could not appreciated in Yokohama, Shane & Barry provided very tight playing as may be expected, showing their excellent abilities. Wayne showed his multi-talented capability (rhythm guitar, keyboards and backing vocal). Especially, I like his voice. Keith's singing was as a whole very good, although for some high-tone parts, he was singing with a little difficulty. However, as was the case with the Yokohama show, the musical interval for Fat City N.O. could hardly be recognizable for me.

I personally feel Michael created better lead playing at the Yokohama show than in the Akasaka gig, and he made a little more mis-tones at Akasaka. But, most of the audience including myself were fully satisfied with Michael playing in high spirits. It was very good to see him hamming on On And On, Looking For Love and Too Hot To Handle as well as walking on the stage toward Barry and other members. 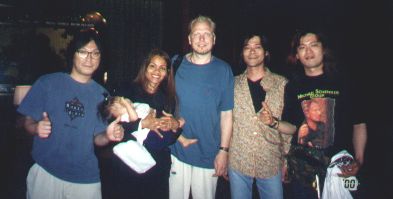 After the show, I along with my friends chat with members and tour crews at the hotel and Hard Rock Cafe. Very cheerful moment! They all are quite nice people. Also, I was happy to see Jeff Kollman joining us. He happened to be in Tokyo for doing some guitar clinics. 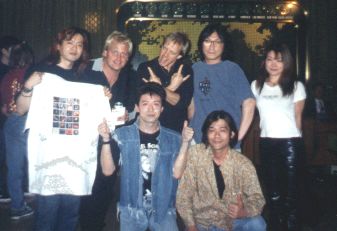 [Addendum No.1] I forgot to mention that during 3 Fish Dancing at that show, the 1st string of Michael's Flying V was cut. While he was changing the guitar, other members kept on thrashing the rhythm. Then, Michael started playing again from the part at which the string was cut. I mean we heard the same part twice in the song. Kind of an interesting scene. 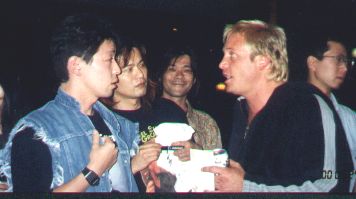 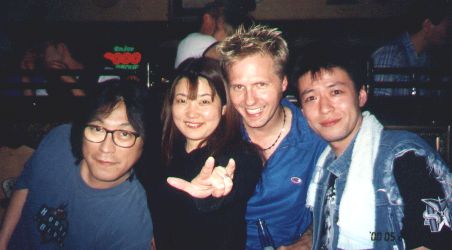