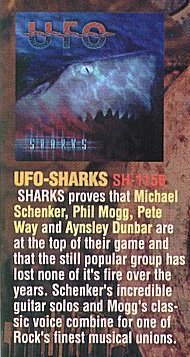 [06/30/02 update]
Sharks ad: The new guitar player magazine which just came out has an ad of Sharks album. It's a new release from Shrapnel Records. Schenker's incredible guitar solo! Thanks, Tom.

[05/29/02 update]
Sliver 2nd Album: This is a bit old news, but according to melodicrock.com (see May 11 entry), Silver's new album titled Dream Machines is due out via Point Music on September 2. Yes, Gary Barden is on this album.

MSR is currently being changed to a new company. Scheynne inc. was the mother company for msr and michael's studio.

[05/12/02 update]
Another Sharks update: Lastest info on the new UFO album, including a track listing can be found at MGAB website.

[05/08/02 update]
Sharks update: The following is an excerpt from the Toral Rock news.

UFO: NEW ALBUM ON THE WAY

UFO bassist Pete Way has told TotalRock that the band have finished recording a new album, with producer Mike Varney. It's to be called 'Sharks' and should be out at the end of the summer. The band (Way, frontman Phil Mogg, guitarist Michael Schenker and drummer Aynsley Dunbar) hope to tour later this year. They are still keen to play British shows, despite the fiasco of their last tour in December 2000, which was cancelled after onstage problems in Manchester.

[04/21/02 update]
garybarden.com: Gary Barden's web-site has been re-vamped and can be found at the following address:

There is now a Fans View section, where fans can leave messages for each other (& Gary), or make contact. Also, there will be regular updates.

[03/28/02 update]
UFO New Album Info: The MGAB site has some updates about the upcoming UFO album.

[03/21/02 update]
Items For Sale: Check out Dave's news page for the information on the MSR's items for sale. 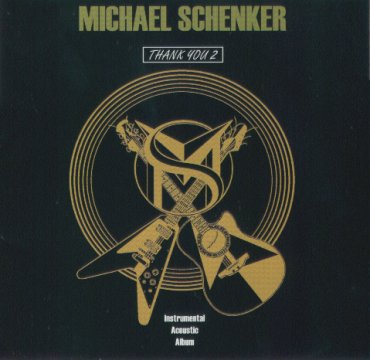 The following info is on the CD jacket. I don't know what kind company it is, but there's no mention about MSR

[03/20/02 update]
Sacramento gig cancelled: Michael Schenker's gig planned for April 19 at the Roadhouse in Sacramento, CA (see the 01/25/02 entry) has apparently been cancelled. Their website has the information about ticket refund.

[03/09/02 update]
Michael New Interview: The latest issue (April) of the Japanese Young Guitar magazine has a 4-page article on Michael Schenker which consists of the recent interview to him (conducted during the UFO recording) and the playing analysis of his new acoustic album titled Thank You 2 to be released on March 21 in Japan. Some of his comments are as follows:

[03/07/02 update]
MSR New Number/Address: Check out Tim's site where you can find a new phone number and address of Michael Schenker Records.

[02/28/02 update]
TY2 Clips: According to Tim, you can download a part of each track of soon-to-be-released Thank You Part 2 at the SPV website.

UFO New Album: Also according to Tim, the recording of the new UFO album has been complete.

[02/14/02 update]
UFO Being Activated: According to the MGAB site, UFO is now in the studio to record a new album possibly to be released in summer as Michael mentioned in his interviews (ref. 12/12/01 entry). The working title for this recording is Sharks. Mike at MGAB also pointed out the probable appearance of UFO at some summer festivals in Europe.

[02/07/02 update]
Info from Chris Logan : Chris Logan's website has been updated. It says that Michael was never SCHEDULED to show up at the NAMM show last month. Also, MSG may resume the U.S. tour in April and there has been discussion regarding Europe and Japan dates. Check this out.

[02/05/02 update]
MSR Reopens Soon? : I got the information that MSR's phone is now working and Linda is taking orders, and that she said the MSR site would be up in a few weeks.

[02/04/02 update]
Schenker Gear On Sale : A guitar shop in Minnesota called SolidBodyGuitar.com has, for sale, Marshall Head, Marshall Cabinet and JEN wah pedal that Michael once owned. You can find the pics of the gear at Steve's page. They are not listed on their website, but Steve has suggested that, as they have a lot of items in the shop that are not listed on the website, we contact the shop by phone or email.

[01/25/02 update No.2]
Is this one of the make up dates? : According to the website of the Sacramento, CA based live music venue called The Roadhouse, Michael Schenker's show is now rescheduled on April 19th, which was originally scheduled on December 7.

[01/25/02 update]
Rev Jones Interview : According to Rev Jones himself, www.rockreunion.com has a new intererview with him. Here is the direct link. It's a good interview. Rev talks about:

[01/21/02 update]
UFO Best : According to HardRadio.com, UFO will release a CD in EMI's Masters Of Rock series on February 15th. The tracklisting is as follows. Here is the direct link to the news. Thanks, Ed.

[01/20/02 update]
TY2 : It is not official yet, but there is information that THANK YOU 2 will be released in Japan on March 21 from the Nippon Crown label.

[01/14/02 update]
Michael Interview: The latest (Feb.) issue of Japanese Guitar Magazine has a two-page interview to Michael Schenker, which was conducted on November 16 last year. He talks about the cancellation of Japanese tour, Jeff Martin, and so on. Many of the topics have been already covered by other interviews. But according to Michael, in addition to the departure of Jeff Martin, the reasons for the cancellation of Japan tour include the fact he had a wrist injury. He went to the hopital to taka an X-ray but found no clue for the discomfort in his wrist. Also, when he was asked about his "home" studio, he said he put about $1 million to build it and therefore it should be a first-class studio. I dare not note his comment about Martin.

[01/11/02 update No.2]
MSR Website: MSR website has been shut down for some while for unknown reasons. In addition to that, Fanclub Phone and fax aren't working.

[01/11/02 update]
Michaet at NAMM: Here is the information from BLABBERMOUNTH.net. Thanks, Batty. As many of you already know, NAMM is the most famous music-related products trade show, but my understanding is that it is closed to the public.

German axe hero Michael Schenker will be available for autographs next week while attending the Winter 2002 N.A.M.M. show in Anaheim, CA. Schenker will make the following appearances:

[01/09/02 update]
New Year's (probably unkept) Resolution: I am and will be trying to respond to as many messages as possible. However, in many cases, regrettably, unanswered mails become buried in the mail flood. Please feel free to send me reminders when you are waiting for my reply.

MSR in good operation: As Dave pointed out the other day, apparently MSR merchandise operation is going smoothly. I ordered a copy of Thank You 3 from MSR online late November, received an email confirmation a couple of days later from Karen, the Fanclub Manager and it arrived on December 15 which is well within the standard delivery time of 4-6 weeks. I ordered a video at the same time, but accidently the one in PAL format arrived which cannot be viewed with Japanese VCR. Then I let them know about it, and the right video arrived during my new year's holiday.

Michael Schenker Interview: You can find an inteview to Michael at Renegade 2K website (the pic on this page looks very familiar). It was conducted just before MSG started the now-defunct U.S. tour. So it is not new and I am not really sure as to whether the future plan referred to by Michael is still as it was or not. However, I think it is an interesting reading. Especially I like his comment about Jimmy Page (I completely agree).

Back to "I Love Michael Schenker Fans" page